Do you know your Klout score? Why should that matter?

Let’s start by talking about what Klout is. Klout measures your influence on the web by aggregating and measuring your social media impact on a 100 point scale. The activity evaluated is not your output like the number of tweets or Facebook updates.

Instead, Klout looks at a person’s level of engagement and interaction with others on the social platforms.

It all starts with Twitter, so if you tweet, you already have a stake in the game.

Top Klout Scores for the Rich and Famous

As you might expect, the folks with top Klout scores are celebrities, politicians, athletes, and other well-known people. Take a look at these notable digits to see who has serious influence on the web.

Your Net Rep Makes a Difference

You may not hobnob with the rich and famous in cyberspace, but a good Klout score can have a positive effect on your business. Your influence and engagement on social media sites like Twitter, LinkedIn, Google+, and Facebook factor into your ranking, and impact your Findability.

The average person scores below 40 while those with hot scores of 80 or above usually have their own Wikipedia page. So, don’t feel badly if you don’t make the grade.

To learn more about improving Findability through social media, I interviewed two Social Media gurus, Gina Carr and Terry Brock, and the authors of the book, Klout Matters: How to Engage Customers, Boost Your Digital Influence–and Raise Your Klout Score for Success. Both Gina and Terry provided key steps to enhance your score and ways to make the most of it. 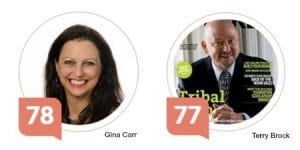 According to duo, one of the big marketing trends for the next decade involves businesses looking for consumers who are already considered to be influencers. Klout is one way to find influential people who could be helpful for promoting business.

For example, the authors spoke to a literary agent who said the book publishers she works with won’t consider an author with a Klout score below 50. This isn’t true for all publishers, but it is a new trend for determining which book to publish since most publishers want authors who already have a strong social media presence (watch the video below to learn more).

Get Perks for Your Cyber Authority

Businesses that value your authority on the web are starting to reward high-scoring customers with Klout Perks. Progressive companies like Virgin Airlines, Motorola, Sony and McDonald’s are banking on your willingness to post positive content about them which will ripple out into the marketing ozone and provide perks as the incentives.

For example, American Airlines once ran a promotion that offered high ranking individuals free access to their admirals club for a day, and Palms Casino Resort did something similar. The hotel upgraded guests with high scores to better rooms at no charge.

How to Bump Up Your Klout Score

My advice for improving Findability with your social media influence is to visit www.Klout.com, sign up for an account, and run your score. Start building your digital impact and ability to influence a crowd.