When it comes to being relevant and timely we need to take advantage of things happening in front of us as I always keep our ears to the ground and keep up with trends, viral moments, etc. Case in point is the example of how the Bernie Meme took off and became viral overnight, a simple picture of Bernie Sanders at the Inauguration would take on a mind of its own. 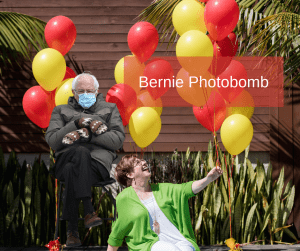 Now it seems that I have it together, but even I (yes you read that right) have hit roadblocks,  I also struggle, like you do, how can I be relevant without looking awkward? Have you guys ever seen commercials where they’re trying just a little too hard to be cute or to be viral? I cringe sometimes and think to myself, I could never do that.

But you know what? I think there’s a way to combine what it is that’s happening in the world with a fun social media twist. So we’re going to talk about memes and how you can leverage a meme to your advantage.

We’re not going to just define a meme,  we’re going to go through the whole process, and show that we’re not too old to use memes as part of our marketing, we just have to make sure that we’re tying it into what our  business is doing,

Facebook is really tough because anyone that is anyone is posting on FB and FB owns Instagram so odds are if you are using both your content will be on both sites when you make a post so you want to get the most traction out of what you are posting.

Let’s figure out how to use what’s happening in social media, but use it in a  way that is going to be helpful to your business, but also has a fun element to it. It’s called social media, not anti-social media. So we have to look social as hard as that might be for some of us during COVID.

So let’s talk about memes. What the heck is a meme? You know,  sometimes you hear things on the internet and you’re like, God, I feel old. I have no idea what that is. When we talk about memes a meme is an element of culture or system of behavior that may be considered to be passed from one individual to another by non-genetic means, especially imitation.

I know you are saying “Heather that is not very helpful” so let me share a few other examples of things that went viral.

Here is an example of a meme that went viral..remember this little girl? And all the fun meme’s that came from this one picture.

Remember the trend of the Six Degrees of Kevin bacon, or am I dating myself? Players challenge each other to choose an actor and then connect them to another actor via a film that both actors have appeared in together, repeating this process to try and find the shortest path that ultimately leads to prolific American actor Kevin Bacon.

It rests on the assumption that anyone involved in the Hollywood film industry can be linked through their film roles to Bacon within six steps. Or being Rick Rolled?. Does anyone remember that I’m dating myself? Where you would click on a link or an article and Rick Astley would be singing “Never gonna give you up” Tell me you didn’t try that a few times.

And what I am trying to say, is that it is not rocket science, you can take advantage of trends and what is going viral and apply that to your business and liven up your social media content, strike while the iron is hot as they say and most of all “HAVE FUN”.

If you want to chat grab an hour from my calendar and we can talk about your business and how we can help you be relevant and who knows maybe someday I will see a meme that you created that may have gone viral, How fun would that be? Book A Discovery Call